COME BACK NEXT YEAR: THOUGHTS ON THE ALBUM TITLE
written over 4 years ago

Well if you've been on Facebook or Twitter or Instagram or that SnapChat thing in the last month then you're probably aware that I've just released my first EP called "Come Back Next Year". 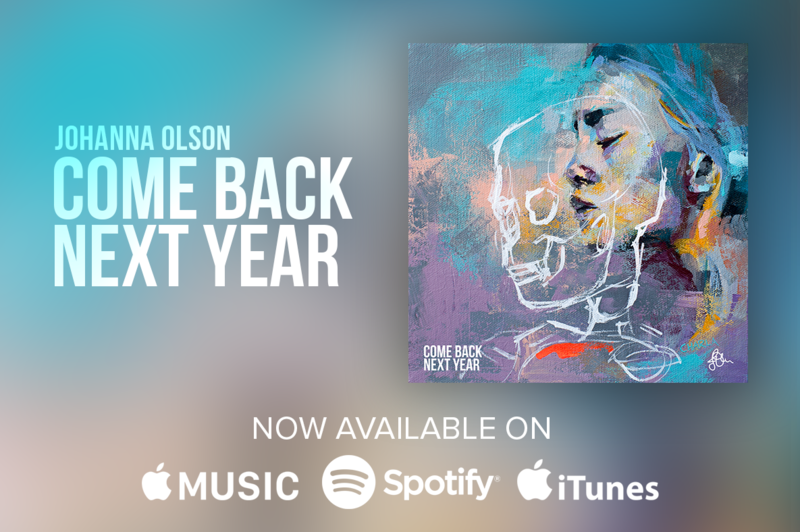 Thought I'd take the chance to give you a bit of insight behind the title "Come Back Next Year".

I named this album "Come Back Next Year" because I felt it was an accurate synopsis of my personal struggle to develop a creative voice and to respect the process involved in doing just that.

Call it a generational thing or call it a Johanna-thing, but I'm a bit impatient with the process of growth. I would like to be at my prime right now (that's the feeling, but I know that's not actually what I want because it would be terrible to ride the rest of my life on a plateau or - worse - a downward spiral). However, I've felt that if I have to be in process then I definitely don't want to do that publically - a place where people get to see the undeveloped, insecure moments of my attempt to "be a singer". Alas, I contemplated not releasing this album. I thought "oh, I've written better stuff since this" or "maybe I should just treat this as a learning experience and wait until I have something really really REALLY good to reveal to people". (Whatever that looks like.) I've also thought about performing in front of the mirror of my bathroom so I can better develop my stage persona before ever being on stage and I've contemplated drafting scripts of things to say so I don't have to endure any awkward pauses between songs. All for the sake of avoiding the discomfort & vulnerability of being in front of people while I figure it all out. I'd rather have an Instagramable life. You know, where the lighting is always right and I always say the right thing at the right time (or I can just delete it).

That said, I am finally beginning to come to terms with the fact that in 20 years I will (hopefully) be better than I am today. And that's cool; it's not a hindrance. If I don't engage in the process then I'll never move forward. I can't perfect in private what I will need to live out in public cause bathroom mirrors are not the same as chatty (or captivated) audiences. Plus, I can't read pre-written scripts anyhow because the paper is always too far away from my face & I never have my glasses with me.

"Come Back Next Year" is both a statement accepting my journey and it's a reminder to myself & to the rest of the world that I'm here. I'm in this. Come Back Next Year and I'll still be around, but a little further along in time & a little stronger in my voice. This album alone will not be my 'claim to fame' or my 'glory days' or my life's work. It'll be a piece of me. A stone in the wilderness. My levain. And I'll be the sustaining perennial that comes back year after year, taking more ground & bearing more fruit with every sun risen & sun set.

To hear some of my thoughts behind the songs on the album, check out this video by Maurits Nienhuis: